Book 2 in the Biosphere Prophecy Series

Book 2 in the Biosphere Prophecy series sees Tully fighting the elements in Greenland's arctic circle, one of the most beautiful and least explored places on the planet. But as remote and harsh as this land is, Tully and her friends find that it is also fragile and under threat from a secret global organisation. Can they discover who's behind the organisation and stop them before it's too late? 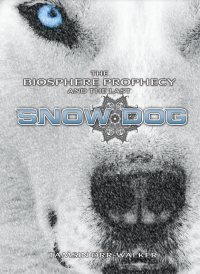 Available mid April 2021
Pre-order your book now.
​​Email us with your order: contact@biosphereprophecy.com

Tully was lost and confused. One moment she had been in the silent cold of between places with Hourig, heading to see Luca at his home in Scotland for dinner, and now, inexplicably, she was here, alone in a frozen wasteland, the wind howling around her like some demented creature. On the verge of panic, she called Hourig’s name several times, but her words were instantly whipped away into the frozen void around her.

“Calm down, Tully, calm down,” she said to herself. Pulling her jacket hood close around her face she squinted out through the driving snow into an alien landscape. Glimpses of vast ice ranges and glacial fields could be seen by the light of some celestial object (was it a moon or a sun? Tully couldn’t tell), which was so diffused by the blizzard she had no way of orientating herself. She thrust her fingers, now completely numb, under her armpits to try to keep them warm, and slowly turned around. There was nothing she could use as a reference point, however, and after a couple of turns, she was completely disorientated.
“Hourig!” she called out again, more desperately this time, but only silence replied and slowly despair welled up inside her as the heat from her body rapidly leached out into the surrounding snow and ice.

Just as she thought she must be the only living thing in this place, she saw in the distance a pack of white, wolf-like creatures running silently towards her, disappearing and reappearing as the wind and snow swirled in front of her eyes. She watched in horrified fascination as they quickly drew closer, wondering if she was dreaming. But then suddenly they were upon her – their warm breath, smelling pungently of fish, enveloping her in reality. She threw out her hands in self-defence, but the animals swept away around her, leaving her unharmed. It was only then she realised that the ‘wolves’ were actually dogs pulling a sled behind them. Tully screamed in horror as they disappeared back into the blizzard and she stumbled after them in a blind panic, legs hampered by the deep snow. Alone again, with no reference point and gripped by fear, she stopped, realising that her only hope of survival had just vanished.